working in the west loop has allowed me to try out several of the amazing restaurants in the area. and as they continue to pop up, i look forward to trying them all out.

recently, my office and our significant others went out to dinner at macello ristorante & pizzeria, an italian restaurant & wood-fired pizza place (for those of you not fluent in italian) on w. lake st. ... self described via their twitter as "cuisine of the puglia region of italy."

i've been to macello twice before ... once for another work dinner, the other time for the reopening event after a fire forced them to close for a while.

in the past, i've had variations of the salads & sauteed veggies. but this trip, i decided to go for the pizza... 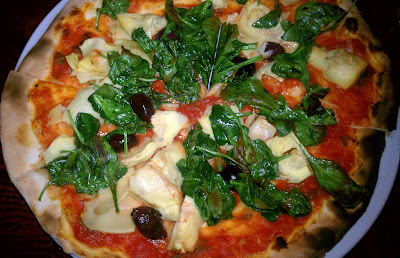 artichoke & black olive (no mozzarella!) ... add spinach.
super thin crust + tomato sauce + kalamata olives + fresh spinach + marinated artichokes = uh-mazing. after eating so much lou malnati's, i was craving some thin crust. and this definitely did the trick.
i pretty much ate the entire pizza ... and thus, the integrity of pizza fridays was upheld.
macello a little gem tucked away in a less traveled (for food anyway) part of the west loop. their food is always prepared to perfection and, in my opinion, represents some pretty great & authentic italian.
labels: chicago italian pizza salad west loop