a couple of guys in my office are pretty in love with belly shack ... self described as a "neighborhood eatery," located on western ave. in wicker park / bucktown.

chef bill kim is the owner of the very well known restaurant : urban belly. later, he opened belly shack, which is a union of him and his wife's backgrounds. let's just say we've all benefited greatly from this marriage. post-lunch discussions posited that it's asian & latin american fusion ... and further investigation into the matter found that it's korean & puerto rican fusion specifically.

belly shack has a very small menu. but they've got a surprising amount of vegan options. all of which are clearly marked on their menu. score one for belly shack!

my work buddies have brought the tostones back to the office for me before ... and those were delish. crispy, salty + a super garlic-y oil sauce? um, perfection. so i was pretty pumped to try eating at the restaurant.

anyway, we recently ventured out there. and all their talk about how awesome it is was definitely true. it was great. here's what we had ... 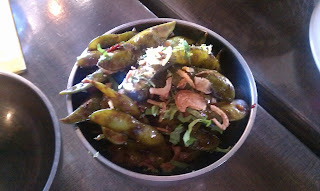 i don't remember what the sauce was called ... but it was both sweet & salty.
and the crispy onions bits (i think?) on top added a perfect bit of crunch. 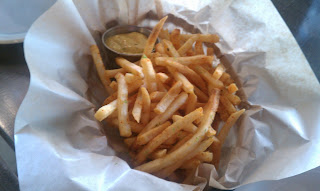 the curry mayo is obviously not vegan. but the fries are. and they are gooood.
togarashi is a japanese chili pepper. the spicy + the salty + the fried-ness? obviously heaven for me. 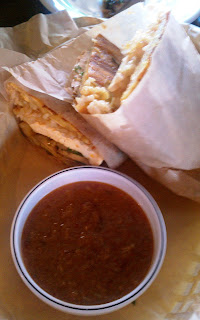 marinated tofu with hoisin bbq sauce & brown rice, served on a crispy plantain.
the pic is a bit unclear (apologies!), but there were also mushrooms on this strange little sandwich. i quickly removed those ... and then snarfed the rest of the dish. the tostones were perfectly crispy. i loved how they played the roll (ha, get it?) of the bread. the tofu was delish. and the dipping sauce was super flavorful. basically, the ideal lunch. besides the fact that i wanted to take a cat nap afterward.