breakfast is hard for vegans. well, for this vegan. even in my meat&dairy-eating days, i was never a big fan of brekkie food. so now? i reeeeally don't like it.

brunch? brunch i like ... simply because of the "unch" part.

the southport corridor has a plethora of brunch places ... i mean, every bar basically has a weekend brunch. but, there is one place i have been wanting to try since we moved to the area 3 1/2 years ago ... southport grocery & cafe, where "comfort food is the name of the game … our own modern twist on the classics."

the reason i hadn't been to southport grocery until now? their wait times are insane. no, seriously. actually insane. on this freezing saturday, we had an hour and fifteen minute wait ... i get it. it's a small place. makes sense. they are just so damn popular! 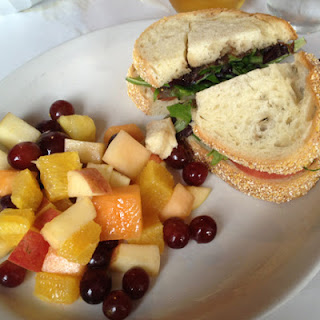 roasted beets, cucumber, tomato,  field greens, & smoked onion spread on sienna bread. no herbed cream cheese or provolone ... & fruit salad w/ vanilla vinaigrette.
perfect veggie sandwich-ness. at first, i was hesitant about the smoked onion spread, but it added a great flavor. the roasted beets were also fantastic.
none of the side options were vegan, except for the fruit salad w/ vanilla vinaigrette, which i was secretly happy about because how delicious does vanilla vinaigrette sound? so delicious. and it was. you could really taste the light vanilla flavor. awesome.


our server at southport grocery was also awesome ... she checked on a bunch of items to determine if they were vegan. (mainly the bread ... but we also asked if the infamous cupcake pancakes were vegan just for funsies ... answer : they are not.)

the other interesting bit of information is that even though they have cray wait times, they also have fancy ipad system ... you give them your name & number ... and then are free to do whatever you'd like. and they'll text you when it's time to grub. genius!