since becoming vegan, i've found that eating at a traditional deli can be quite difficult ... so many meat & cheese sandwiches ... you're lucky to get away with a dinky "garden" salad.

however, that's not the case at all at the bagel, a classic jewish deli located on broadway in lakeview (also, one at old orchard in skokie).

we've been going to the bagel for years ... and it's definitely our favorite deli in chicago. so when josh wasn't feeling well this week and wanted some matzo ball soup, off i went.

the menu at the bagel works extremely well for vegans ... they've got a different vegan soup every day ... as well as a bunch of huge salads & other vegetarian dishes that can be prepared vegan. and, if you eat in the restaurant ... they put a little plate of delicious kosher pickles on the table for your enjoyment. aka the best thing ever. 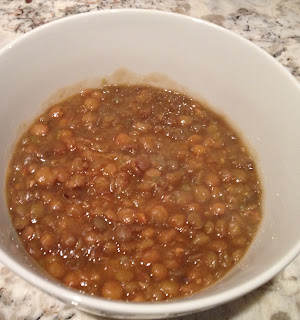 100% meat & dairy free.
so.yum. this soup was super thick, which was perfect in the chilly weather. tasty, warm & filling. can it get much better?

the bagel only sent challah bread with the soup (not vegan!), but that was okay because i had my vegan butter & vegan multigrain bread at home to dip. double the amazingness.

i don't believe the menu at the bagel has changed much over the years, so here's their daily vegan soup options just for you! :
- monday : vegetable.
- tuesday : lentil or bean.
- wednesday : split pea. (sounds so good.)
- thursday : vegetable.
- friday : mushroom barley.
- saturday : potato. (another favorite of mine.)
- sunday : mushroom barley.

for non-vegans, the bagel is a must try for some authentic deli food ... and for vegans, it's just a great place to eat. definitely worth checking out.
labels: carry out chicago deli favorites lakeview salad soup