let's start off by saying ... i think i've made it pretty clear that i love small plates and tapas restaurants.

moving forward ...
i recently went down to st. louis, missouri for mardi gras weekend. before the trip, i knew that one of my favorite indianapolis restaurants also has a location in st. louis. you know what this means.

so, we decided to go to barcelona tapas for dinner one evening. they've got some great, traditional spanish tapas available... and LOTS of vegan options and items that can be prepared vegan.

a couple of notes :
- the food at the st. louis restaurant was definitely better than the food at the the indianapolis one.
- the plates look a little sloppy ... besides the first one, this is how they were presented.
- no bread (more on that later).


i started off with the aceitunas aliñadas : 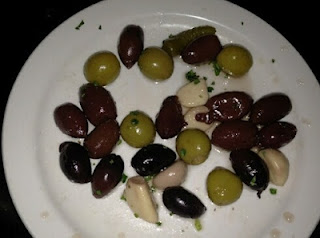 spanish olives marinated in olive oil & spices.
obviously i ate the entire plate by myself and obviously i forgot to take a picture before digging in. this is what the plate looked like after i had already eaten half.

next was the pimientos asados : 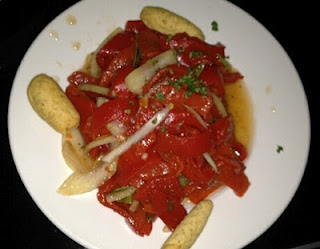 marinated roasted red peppers with garlic.
this was tasty & salty, yum. however, it slightly tasted liked chopped up red peppers out of a jar.
another dislike : it didn't come with bread. i found it difficult to just eat a huge plate of marinated red peppers without something to put them on (besides those little crackers), so we made a request for some fresh pan. mmm. 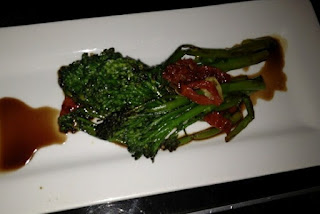 and lastly, i shared the trigueros con romesco :
grilled asparagus with romesco sauce and manchego (sans manchego).
as you can see, no photo here. this  is in protest ...
only 3 spears of asparagus for $6.25? not my cup of tea.