as i mentioned a while back, josh and i recently ventured down to our alma mater, indiana university, in bloomington, indiana (in a massive snow storm, no less)... for a weekend of unhealthy food, copious amounts of beer and general tomfoolery.


here's a photo of us at a brewery tour : 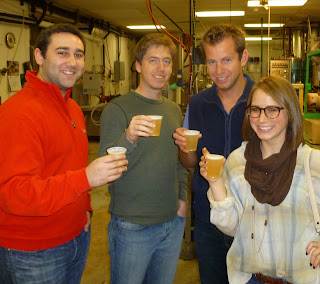 josh, pete, caylan & me... my three best boys.
this was taken at bloomington's own upland brewing co., where we sampled several amazing beers. unfortunately, we did not eat here. i wish we had... their menu looks incredible!

my next three posts will feature three restaurants/bars we ate at during this trip:
- the village deli.
- nick's english hut.
- yogi's grill & bar.