this might be my saddest food post yet. not because what i ate wasn't good... but because the photo of it is so pathetic.

nick's english hut is a classic bloomington bar most well known for their game... 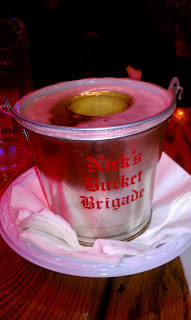 like many alcohol related games, this one involves several individuals drinking copious amounts of beer.

in terms of food though, i had a black bean burger : 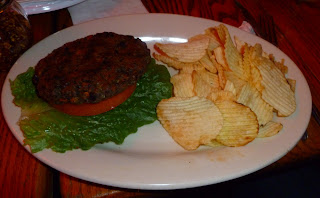 nick's own house blend of black beans, vegetables and grains with a side of ruffle chips... you know, to keep it healthy.
isn't this the saddest looking plate of food you've seen in a while?
now the black bean burger was actually quite tasty... i took away then bun since i didn't want it, but mainly because it looked like it might have an egg wash on top. the lack of bun might be affecting the sadness of this plate.