a few weekends ago, my friend (hi, erin!) & i decided to do brunch & mani/pedis for a little girl's day. we settled on bucktown / wicker park, then landed at dove's luncheonette for food. 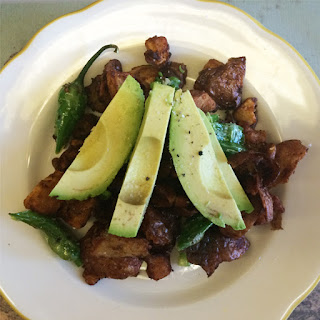 fried potatoes, shishito peppers, scallions & added avocado.
quite good. maybe it wasn't hash-like because it was veganized. also could have done with more shishitos. duh. 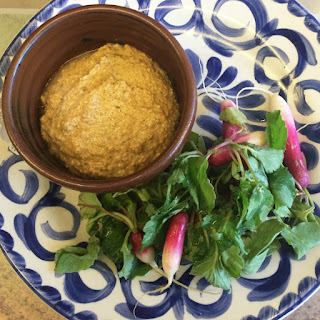 pumpkin seed dip w/ radishes. (no crackers.)
i really wanted to like this, but i didn't the dip was a little salty ... & i was confused as to how to eat the radishes. (my bad.) i mostly just put some of it on my taters.

things started off somewhat badly, because i was really pumped about the avocado toast. when i asked our server about it, she knew immediately that the bread wasn't vegan. this means to me that other people have asked. a vegan version of bread is not difficult. it made me wonder why not have a vegan bread or vegan bread option? especially when you have such an easy dish to make vegan. i mean, it is wicker park. they've gotta get a lot of vegans.

the other issue? : hipster service. as first documented by jerry seinfeld & fred armisen on comedians in cars getting coffee ... erin & i experienced this in full force.

am i in a bad mood lately or something? while the potatoes were good, i just didn't feel like i ate a meal. dove's just sadly was not for me. (we made a stop at stan's after. day saved.) maybe you other vegans will fare better!