i know we've discussed vegan hangover food before. but nothing i've experienced has come close to the delicious relief that katalina's cafe corner brings.

katalina's is "a tasty twist on convention ... the little cafe with lots of loco goodness." the loco bit should be a hint that many of their offerings appear to be mexican inspired. perffffecto.

another plus? katalina's is located in harrison west ... right near dear ol' pete's apartment. an easy walk. phew. 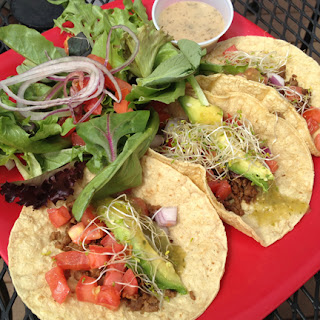 veggie crumbles, alfalfa sprouts, red onions, tomatoes & avocado on corn tortillas w/ a mixed greens salad.
ok, i don't usually go for the fake meat. but this little gem was so easily veg-ified, i had to go for it. (hold the cheese & sour cream.) oh.um.wow.yum. i added a little cholula ... and then literally inhaled these puppies. i also love a corn tortilla (boo, flour!), so that was just an added bonus.

soup of the day : 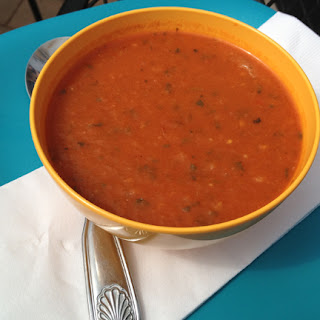 vegan tomato & basil.
and labeled as such! i really didn't need to eat this bowl of soup, but since it said vegan right on the little chalkboard, i had to go for it. a perfect addition to my already huge meal.


vegan awareness at a restaurant is always a win in my book. so having these awesome vegan options on the menu made me a happy girl. katalina's is definitely worth checking out in you're ever in the hood.
labels: brunch comida ohio salad soup travel