this truly has been the summer of pizza. i have been obsessed and i have no idea why. i actually want some right now. it's just so good!!

when it came time for a celebration (yay, carly!), my friends and i decided to head to where else, but a pizza place ...

la madia is located in river north ... they describe themselves as "an urban restaurant that upholds italian tradition." okay, sure. whatever. just give me some pizza. 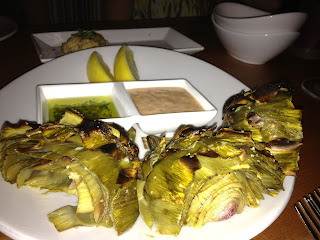 mignonette & mustard sauces.
the mustard sauce was not vegan, but the mignonette was. DELISH.
i happen to love artichokes, so this was the perfect starter for me. 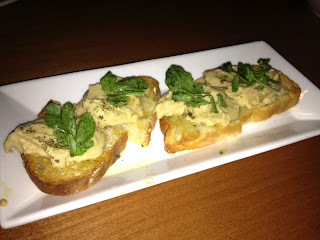 lemon & virgin olive oil.
i actually cannot explain how delicious this was. it was so so so so so good. seriously, a must have.
my kind of bruschette. 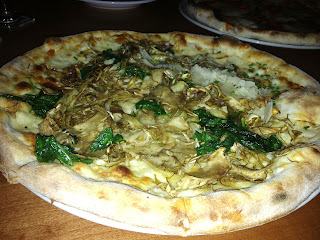 garlic & spinach.
more artichokes! yum!
we did have vegan and half non-vegan to share ... and we added spinach for a bit more flavor on the non-vegan side. the sauce and crust was amazing. my only complaint is that i couldn't taste the artichoke enough! but since i had eaten almost an entire plate by myself as an appetizer, i can't really say too much. just really good.


so team, if you're looking for a fun, casual place for din, la madia is a great one to try ... and don't forget to get the ceci bean bruschette. fa realz.
labels: alcohol chicago gold coast italian pizza river north veggies