my office has a few favorite restaurants in chicago for taking clients when they come into town. david burke's primehouse is just one of them.

david burke's is located in river north inside the james hotel. they're known for their 75 day ribeye ... for those vegans that don't know, that means it's dry aged for 75 days before cooking. this steak was featured on the food network. menu description : "intense steak flavor" ... it's pretty much the exact opposite of a vegan meal. but ... since i drag josh around to wherever for vegan foods, i thought it was only fair to try david burke's for him. 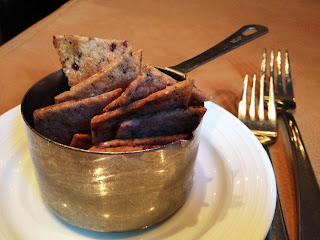 nice & crunchy. nothing special.
the non-vegan option was a cheddar popover type bread. josh loved it. 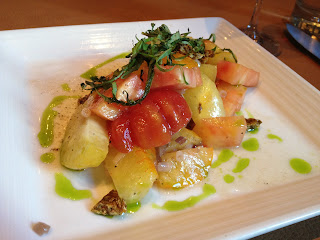 pickled ramps , candied fennel seeds & sherry dressing. (no fresh mozzarella.)
this was so so so good. i absolutely love tomatoes, so i obviously had no complaints. 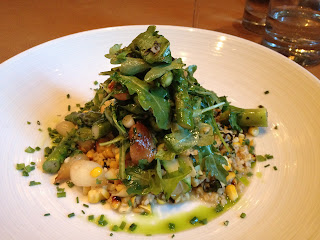 arugala, corn, apsaragus & other local ingredients.
also super yum. i love quinoa, but in small portions. and this mix of veggies & quinoa was perfection. everything tasted so fresh and it was just the right serving size. especially after my huge plate of tomatoes. 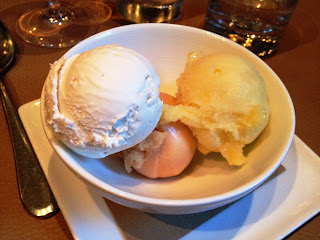 kalamansi, orange chamomile & coconut milk.
this was my first time tasting any of these sorbet flavors ... and let me say, they were delicious. the coconut milk was so incredibly creamy! josh wasn't a fan, but i love coconut, so i really enjoyed it. the other flavors both just tasted very citrus-y and i couldn't really pinpoint an exact taste. but still delicious.


the team at david burke's primehouse was extremely accommodating to me. one of the chefs, bri (or bree?), prepared my vegan dishes ... and even brought out my quinoa entree herself to explain the components. as you know, i love that! and truly appreciate it.

i like to believe it's a fun challenge for chefs to create something delicious out of animal-free ingredients. whether or not this is the case, the kitchen at david burke's certainly did a fantastic job. and yet again, we learn that vegans can have an outstanding meal at a steakhouse.
labels: chicago dessert gold coast river north salad steakhouse veggies