so we've made it to june ... and yet another stop on the chicago top chef restaurant tour ... this time, we went to spiaggia, a super fancy italian restaurant where chef sarah grueneberg is the executive chef.

now, spiaggia will certainly cost you a pretty penny ... so josh and i decided to save it for a special occasion ... and in this case, a double celebration : our 10 year dating anniversary & our 1 year wedding anniversary.

i'm not going to lie, i was pretty much super incredibly excited to eat at spiaggia. not only because i hoped we would see chef grueneberg (sadly, we didn't) ...

but mostly because i knew that the items she created on top chef finale were offered in a special tasting menu. and even though (obviously) none of it was vegan, i was really hoping that josh would get it. and he did! i didn't take pics of his food, but he thought it all was fantastic. with every one of his five dishes, i asked him if the food was top chef worthy. his answer was always, "yes."

anywho, the team at spiaggia was super accommodating to my vegan needs. here's what i had ...

an amuse-bouche (since i don't know the italian word for this) : 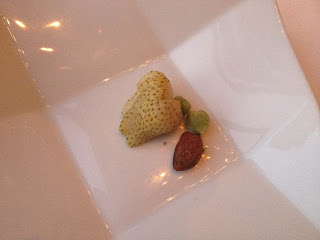 pickled strawberry, chickpeas & an almond.
so interesting & kind of weird ... in the best possible way. 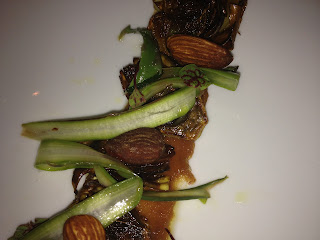 roasted artichokes with almonds, shaved asparagus & a medjool date puree (no cheese).
incredible. the date puree was nice and sweet ... a combination i wouldn't think i'd like with the artichokes, but it was amazing. 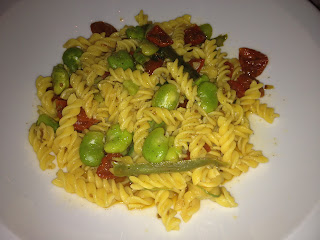 fusilli with roasted tomatoes, shaved asparagus & fava beans in a white wine sauce.
also incredible. in my life, i have never had a white wine sauce. so i figured this was the place to try it. and i am so glad i did. because it was so fantastic. i could have eaten 4 more bowls of this. easily. but that wouldn't have left room for dessert ... 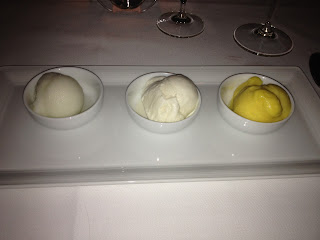 passionfruit, cinnamon rice milk & blood orange.
okay ... these were absolutely insane. i have seriously never eaten any food that packed much flavor into each bite as the passionfruit and blood orange sorbetti. so so so yum. however, the cinnamon rice milk was my favorite. it was just so rich and creamy and perfect. i really wanted to ask our server if i could get 17 quarts of this to bring home, but i decided that it wasn't really appropriate for such a nice restaurant. alas, a reason to return!

to sum it up, spiaggia is pretty much amazing. the food is truly out of this world. however, what i was most impressed with was their staff ... we had our one server and then several other individuals who would bus the table, bring out food, refill our wine & water or offer bread. every single one of them knew that i was vegan, what ingredients were in their food and what i could or could not eat. by far the best customer service i have ever received at a restaurant.

so in the eternal words of ferris bueller, "it is so choice. if you have the means, i highly recommend dining there." (i may have altered that slightly, but you get the picture.)
labels: chicago dessert gold coast italian river north top chef