it wouldn't be fair for me to start out this post without saying that i miss leo's coney island ... vegan chicago style hotdogs? seriously amazing.

that being said, when crosby's kitchen opened up at southport & cornelia in the old leo's space this past summer, i was excited to try it.

so when carly & i were looking for a brunch place ... and southport grocery had a 1.5 hour wait (whaaaa??) ... we landed at crosby's kitchen. finally! 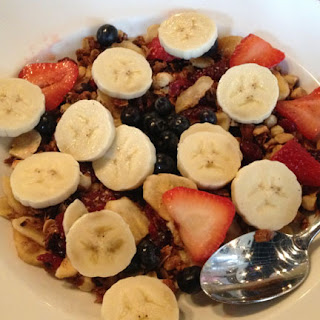 fresh fruit & granola (no yogurt).
surprisingly delish, given how simple this is. the granola is made in house & is completely yummy. i basically snarfed up the whole bowl. my only suggestion ... crosby's should get some soy milk in the kitchen. not only for this, but because i think sometimes people just want soy milk in their coffee or tea instead of dairy milk. this would have been slightly improved ... but it was great either way.

crosby's has a couple other vegan options : salads (which can be prepared vegan) & a vegetable side (sunday's was asparagus, prepared vegan!). they also have a veggie burger, but i didn't ask about that. so maybe vegan.

but since crosby's kitchen is certainly on my "go back to asap" list... i can find out next time!
labels: brunch chicago lakeview lunch salad