my grandma lives in springfield, illinois ... our lovely state's capital city. we've obviously been going to springfield since i was little ... and one of our favorite summer traditions is going to the illinois state fair.

the state fair is not the most vegan aware place in the world. lots of fried options = not a lot of vegan options. however, i was able to find a few things to snack on. here's what i had ...


the first stop for me was at culler's french fries ...
what seems to be a springfield tradition. 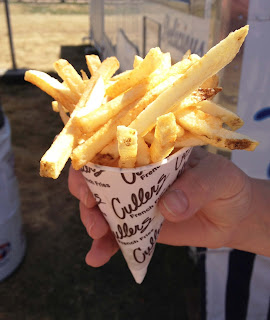 fresh cut & fried in vegetable oil.
is there anything better than some fresh cut & fresh fried french fries? don't think so.
extra salt & vinegar? yes, please! i could go for another batch right now.


the second stop was at the ethnic village, a little cluster of food booths with "ethnic" food. there were probably a few vegan options at the indian and thai cabins ... but it was 90+ degrees and i wasn't in the mood for either of those delicious cuisines. i found something else instead ...


cajun corn on the cob : 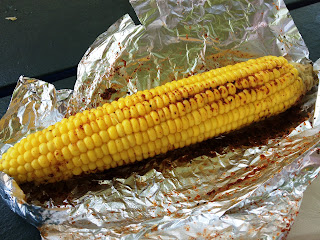 boiled corn + cajun spices (no butter!).
can you really go to a state fair without eating corn on the cob?
so tasty.

the last stop was to try ...
the iconic lemon shake up : 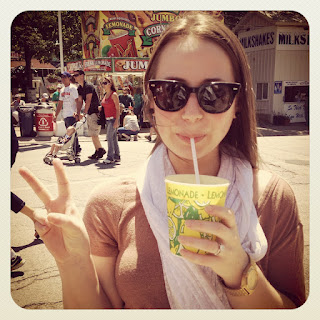 water, lemons, sugar + ice.
you can get these at about a million little stands throughout the fair grounds.
refreshing & delicious. i had two.


so while the illinois state fair might not have the most vegan choices, they've got a few tasty options. maybe next year they'll bring the veggies, salads & other actually healthy foods. until then, we can stick with the carbs.
labels: chicago salad veggies