josh and i hail from the lovely chicago suburb of northbrook ... a place not known for their fantastic cuisine, vegan or otherwise. however, one of our favorite spots there is kamehachi, a sushi place right in the "downtown" area. (yes, i'm using that term lightly.)

kamehachi also has a location in old town. we've been to this one, as well ... and it honestly is better than the northbrook restaurant ... josh agrees, in terms of deliciousness of the actual sushi.

but for northbrook, it is really good. and we recently ordered carry out from this location. here's what i had ... 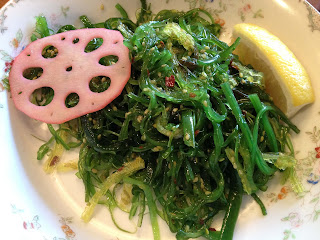 assorted seaweed marinated in a red pepper & sesame dressing.
as i've said before, i always order seaweed salad and then end up not liking it. this was a particularly good rendition, mainly because of the tiny bits of red pepper that added a bit more flavor. don't get me wrong, the seaweed was still impossible to eat and i was constantly worried it was stuck in my teeth (anyone who has ever eaten a seaweed salad can testify to that) ... but it was good. 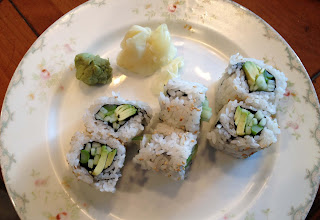 asparagus, avocado & cucumber.
the aac maki is one of my favorite rolls out there, since it combines most of my favorite sushi veggies... however, it still falls behind the zen roll at rise or shine in the city. my only complaint with my aac maki was that the restaurant only sent low sodium soy sauce home with us... which contains lactic acid (and not specified whether or not it is from a vegetable source). so i had to just eat it with wasabi. wah.


overall, our carry out was good, furthering our belief that kamehachi a consistent spot for some decent sushi. so whether you're in northbrook or old town, it's worth trying out.

on a separate note, last time i was there, they told me that the vegetable tempura batter was vegan. this time, they said it had egg in it. (that's why i always ask even if i've had it before!) so maybe it was vegan and now it's not ... or maybe they messed up last time ... or this time. either way, i was sad. c'est la vegan. (see what i did there?)
labels: asian carry out chicago salad sushi