ever since paulie gee's opened up (a while back, i don't know when) & i found out they had a whole vegan pizza menu, i have been wanting to go. so a couple weeks ago when an impromptu group hang sesh happened, my genius friend (hi, mavis!) suggested it ... off we went. (hi to the rest of you, too.)

there's literally no information about paulie gee's on their website. but their facebook page says, "we are a wood-fired pizza restaurant!" straight to the point. i like it.

while i loved my pizza, you'll see three things that i thought were weird. keep reading. 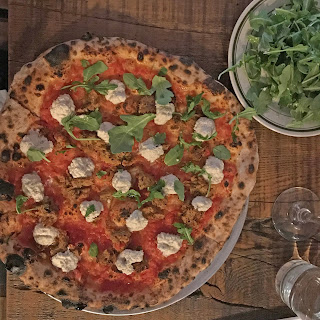 italian tomatoes, house-made vegan fennel sausage, post-oven house-made cashew ricotta dollops, baby arugula & extra virgin olive oil.
it took me forever to decide which vegan pizza i wanted. especially after our server told us two things (aka, my first two gripes). 1. he let us know you cannot have any substitutions or deletions on any pizza. our entire table was puzzled by that. example ... i don't love arugula. i don't love a salad on top of my pizza. i wanted no arugula. no can do. my vegetarian friend wanted to leave the speck off his pizza. he does not eat meat. no can do. josh did not want "spicy honey" on his pizza. because, it's honey. on a pizza. no can do. very confusing to us. WHATEVER. 2. he said his favorite vegan pizza was the rabbit pie. WHICH. CONTAINS. PINEAPPLE. what?! imho, that's an aggressive recommend.

ok, so anyway. i got the in ricotta da vegan & shuffled the arugula off. see side salad above. after all that, it was quite delicious. however, enter issue 3. no crushed red pepper! only spicy oil. what kind of chicago pizza place doesn't have crushed red pepper?? additionally, while the spicy oil was awesome ... does everyone want an additional 1,000 calories of oil on their pizza instead of 0 calorie c.r.p.?!

were these fun little quirks enough for me to never go back? definitely not. i want to try the vegan daniela spinaci pizza like woah. but i'm steering clear of any pineapple pies.