there's a little place that i'm sure most of you know about in the west loop called the chicago french market ... it's awesome. it's literally like being in a market in paris ... or barcelona ... or florence ... you get it. it a "european-style indoor market." capisce?

the french market is super vegan-friendly ... my typical go-to is saigon sisters, because, well, pho. but now, there's a new girl in town & her name is, wait for it ... vegan now. woohoo!

vegan now comes from the creators of original soul vegetarian on the south side ... they're also the makers of that delicious vegan mac & cheese you can find at whole foods. (post on my fave grocery store mac & cheese options coming soon ...)

anyway, vegan now is a "one of a kind culinary experience in innovative vegan cuisine." does it get any better? 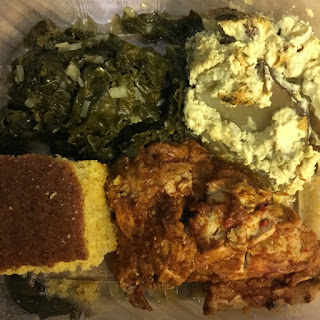 collards, cheesy potatoes, bbq tofu & cornbread.
i mean, if this isn't southern food, then i don't know what is. this was an "everything was delicious" situation. cornbread could have used some vegan buttah, but that's okay. i pretty much devoured the entire container. this is also a prime example of the photogenic-ness of food not being equal to the tastiness. woot!

other positive things about the french market / vegan now ... 1. free parking. 2. perfect spot for lunch w/ non-vegan pals. 3. vegan dessert option located next door to vegan now. (stand by for next week on that one.)