sometimes, one (me) just craves indian food. this happened last week. but instead of going our usual route, i wanted to try somewhere new.

new (to me) = arya bhavan, located on w. devon avenue ... although, per the usual for a lazy weekday night, i ordered delivery.

a bit about arya bhavan : "our food, with its unique combination of fragrantly subtle spices, is a representation of the many and varied regional cuisines of india & the many ethnic groups of people in the subcontinent." 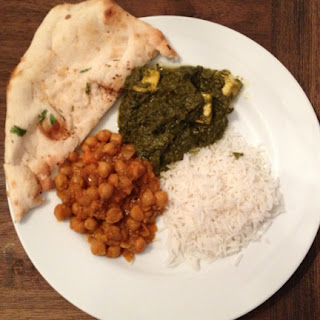 palak paneer : fresh organic spinach & pan-seared vegan cheese, seasoned with cumin, onion, cinnamon, cardamom & garam masala spices. i have been craving palak paneer basically since the day i became vegan. no where offers a vegan version. so i absolutely had to try this. amazing. fantastic. must have. could eat for every meal, every day.


arya bhavan also offers a buffet if you eat in the restaurant. i am definitely doing this soon. because i want to try pretty much everything on the menu ... & eat myself into an indian food coma. this food is so great ... aka you should probably head over there now. like.now.