various peeps have been telling me about naked pizza for some time now ... well, since one opened over on diversey last spring/summer.

naked pizza's mantra is all about "delicious, honest pizza with no freaky chemicals, based on the latest nutritional science." sounds right up the vegan alley, right?

i had heard two different opinions about naked pizza before trying it.
the non-vegan side : delish!
the vegan side : good, but a little heavy handed on the daiya. 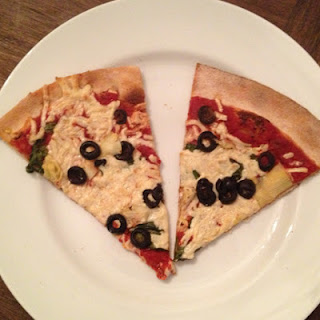 daiya mozzarella cheese, black olives, spinach & artichokes.
i'm not sure the last time i had a legit pizza with actual vegan cheese. so naked pizza really hit the mark there. the only issue i had was too.much.daiya. oh, and not enough veggies! i love lots o' veg on my pizza (i am vegan, after all).  my vegan friend was right.

but i think this issue is really a vegan/non-vegan one. i used to be a regular old eater. and i can honestly tell you ... you can't ever have too much cheese on a pizza. but for vegans, you can have too much vegan "cheese." so to pile on the daiya ... slightly too much.

don't get me wrong ... i did enjoy naked pizza .... and i will certainly try it again. in fact, i'm looking forward to it! next time : light daiya, extra veg. mmm.
labels: carry out chicago lincoln park pizza veggies