my family has always had a tradition of ordering pizza on friday nights... a tradition that josh very much appreciated. but for the two of us, ordering pizza for dinner became much less frequent... and basically stopped once i became vegan.

here's where the story gets interesting...

josh's favorite pizza place (chicago or elsewhere) is lou malnati's... so when he was craving it one friday evening, i decided to do a little research.

lou malnati's is known for their "buttery crust." so i just assumed that their crust was not vegan. however, a quick google led me to believe that there actually is no butter in their crust! umm... !!!

i called a couple locations (to ensure accuracy!)... and not only did both sites know what a vegan is without me explaining, but they also confirmed that their regular deep dish crust is vegan! very exciting news around our house.

**basically, unless you request a butter crust... it doesn't have butter. so to be safe, i would still specifically ask for no butter and no cheese (specify both mozzarella and parmesan)  for future ordering.

so i decided to order a small deep dish pizza... spinach, black olives and their delicious chunky tomato sauce... no butter, no mozzarella, no parmesan. 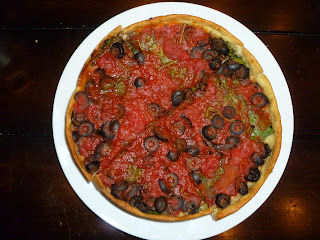 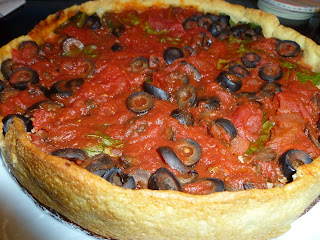 it's been a long time since i've had lou malnati's (besides their house salad : one that actually is delicious!)... so my excitement may have affected how great i thought it tasted. i very much enjoyed it.

all in all... it most certainly satisfied any craving i may have had for chicago deep dish pizza... josh is glad to have pizza fridays back! and so am i.

***update from a lou malnati's employee ... "i can confirm, as someone who works for lou malnati's, that the dough is vegan. that is for the deep dish dough. the thin crust dough already has butter added to the crust. you can, of course request to have it without." there ya have it.