okay, so the saturday that we went to the hampton social, we decided to search for some donuts on our walk back to the car. i was with my usual crew consisting of a normal, a vegan & a gluten-free. we knew the normal would be fine wherever, but vegan & gluten-free donut options? could be tricky.

luckily, we stumbled upon firecakes donuts. tbh, i had no idea they had a vegan donut. but, since "firecakes offers small-batch donuts, made from scratch, using traditional recipes with creative twists," it's no surprise. especially no surprise that the vegan donut is also the gluten-free donut. 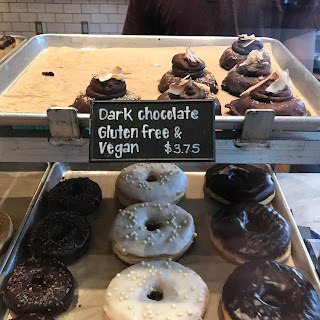 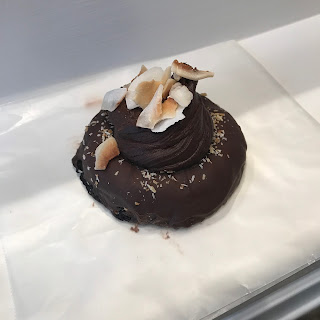 ok, so here's where the gf aspect kind of ruined things ... this was the worst donut i've possibly ever had. i know. i'm sorry!! my general rule is all vegan donuts are good donuts. but the gluten-free-ness really effed us vegans over on this one. except for the coconut shavings & chocolate frosting on top. those were both bomb.

listen ... if you're a gf vegan, this is probably going to be amazing. i know how few tasty baked goods there are out there that are both gf & vegan. but if you're just a regular old vegan walking around town, still try it. i mean, maybe you'll love it. if not, just keep walking.