this silly new lifestyle of mine where i don't ingest a lot of carbs with the goal of not being a marshmallow has really put a damper on my pizza-eating schedule.

so when we were planning our arizona trip & the infamous pizzeria bianco in downtown phoenix was recommended to us by not one, but two people (three if you count oprah), i knew we had to go. vacation is the time for carbs, right? obviously. 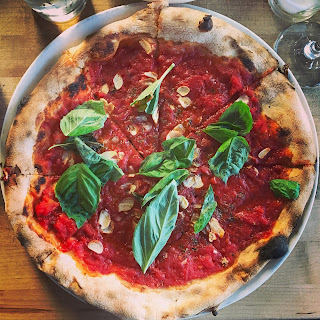 tomato sauce, oregano, garlic with added basil.
mmm. at this point in time, i hadn't had pizza in legitimately ... at least 2 months. does that seem like a long time to you? it was. for me. this 'za was delicious & i was super pumped to inhale the entire thing. (i didn't. #restraint #terriblelifechoice)

a quick google of pizzeria bianco will lead you to believe that it is perhaps the best pizza in the whole u.s. of a. i personally don't know if i agree with that ... as i've had some pretty bomb ass pizza right here in chi city. some may argue that a vegan has no authority on this issue, which i tend to agree with. so just disregard this post in general if you fall into that camp.

pizzeria bianco was damn tasty. i'd eat it again in a heartbeat. and it's super cool that there's a vegan pie just casually sitting there on the menu waiting for one of us to come eat it. so if ya chillin' in the phx desert sun, definitely grab a slice... or eight.