when i started researching where to eat in new orleans, the first thing i did was google which chefs had been on top chef. i came across a few options, but once i remembered justin devillier was down there, i knew we had to head to his restaurant, la petite grocery.

on the la petite grocery website, it says : "in march of 2004, la petite grocery opened its doors ... we hope to provide a dining experience that evokes nostalgia of old new orleans. ... devillier puts his creative spin on traditional new orleans cuisine with dishes." get excited! after a quick search to see that la petite grocery was cool with vegans in general (traditional nola cuisine doesn't make me think of vegan food, per se), i called ahead of time to give them a heads up & make our reservation. 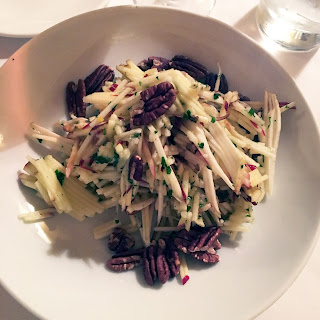 apples, radish, pecans.
per the recommendation of our server, this was quite delicious. plus, already vegan besides just some cheese on top. i was really feeling the pecans & could have used a lot more of them on top here. 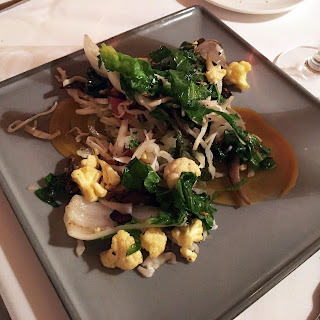 bok choy, cauliflower, cabbage, etc.
this a "let the chef make magic" dish. it was magic. but i did feel slightly cheated because our server described it as having red quinoa also ... which it would have been nice to have a hearty carb along with the awesome veg flavors. 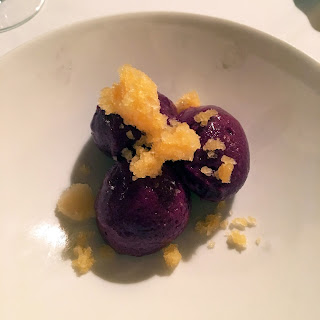 i know it's just sorbet, but this was my favorite dish of the night ... i had never heard of satsuma (a citrus fruit grown in the area) so i kind of had to try this. the sorbet was amazing. the granita was amazing. a perfect end to the meal. side note ... since this, i've seen satsuma at whole foods every week. so basically, i'm just oblivious to the world around me.

la petite grocery is awesome ... cool ambience / design ... great food ... awesome dessert ... plus, top chef status. if you're down there, check it out.