one of my friends (hi, tedi!) & i like to try new places to eat when we hang out. a while back, we went to native foods cafe ... and on our way out, we noticed a little place across the street that looked good : indie burger on w. belmont & n. kenmore in lakeview.

we had been planning to go here for literally months. but before we ate, indie burger already had two strikes.

1. the first time we attempted to eat there earlier this summer, they decided not to open on time. ok.
2. this time, we realized they have no ac ... they also were out of la colombe coffee. sads.

thank goodness the food was awesome! no strike three! 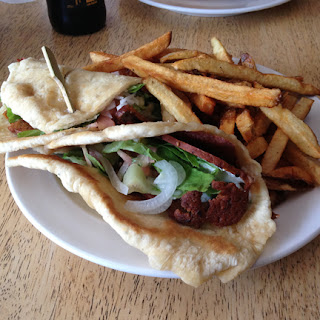 seitan, flatbread, soy tzatziki sauce, tomatoes, lettuce & onions.
made entirely from scratch in house.
this was listed as a special, but it's on their website all the time. delicious. a little light on the soy tzatziki (i mean, i could eat a bucket of that stuff), but besides that : perfection. the flatbread was especially tasty ... it reminded me of a denser version of naan, something i actually do miss as a veggie.

indie burger also has a vegan chickpea burger (if you request soy tzatziki instead of regular) ... i plan to try it next time!