cubs vs. white sox - the age old debate in our lovely city.

while i hail from a cubs family, josh's are sox fans. so on a beautiful chicago summer night, we headed to u.s. cellular field : the baseball stadium formerly known as comiskey park.


view from the bleachers : 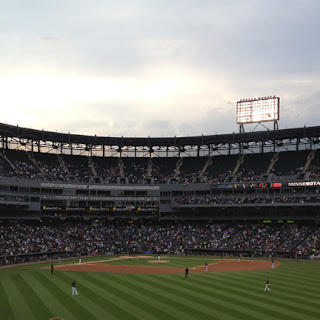 "the cell" (that one's for you, josh) used to have a veggie & hummus cup (i use the word "hummus" loosely here) on the menu that was vegan. not your typical baseball park fare. but that went away this season. boo!

josh & i had gone to dinner at davanti enoteca before the game, assuming there'd be nothing really for me to eat.

so i didn't actually order any food. but i decided to do a little investigating on the vegan options at the park. i started here ... where to eat at u.s. cellular field. i found out that there are veggie dogs & garden burgers on the 100 & 500 levels ... 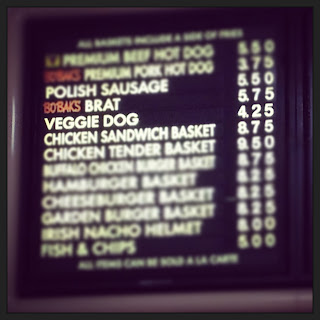 the consession stand!
i asked to see an ingredient list ... yes, the veggie hot dog is vegan. (allergens = soy, wheat & mustard). they also have a morningstar garden burger, but they couldn't find that ingredient list. now, morningstar does have a vegan burger, but they also have a non-vegan burger. so not sure which one they have at sox park, but worth asking about if you're there & hungry.

after our tour of the outfield, we headed to our seats in the club level. but first, a stop at the bar.

me + a cup of always delicious sutter home cab sav : 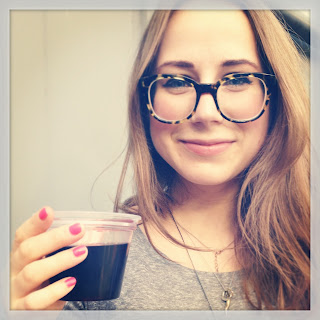 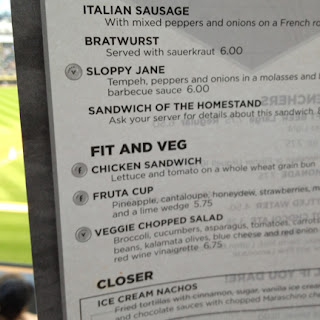 the v markers indicate vegetarian ... but obviously you could ask for no cheese on the chopped salad ... and i'm not sure what the point of making a tempeh sandwich that isn't vegan would be. our waitress never really came over by us, but next time, i plan to ask more questions. if you're there first, let me know!


i might guess that the lemon italian ice, fruta cup, soft pretzels & maybe even more are vegan, too. but i didn't get that far.

i'm not going to be too judgemental here. i mean, it's a baseball stadium. beer, peanuts & hot dogs are the usual food groups. but u.s. cellular won't leave you hanging. they do a good job. so don't worry. you won't go hungry.