an obvious stop for us in portland was voodoo doughnut ... because, well ... it's an iconic portland donut shop &, more importantly, they have vegan donuts.

the basic story of voodoo is that a couple of guys who knew nothing about making donuts decided to learn the donut tricks & open a shop ... well, let's all be glad they did, because we get to reap the benefits of their bravery & learned skills. 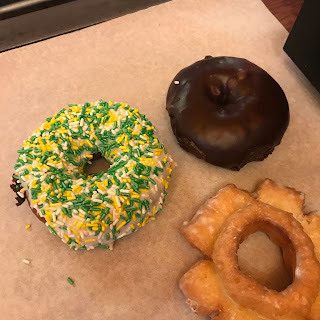 sprinkles & chocolate chocolate ... ignore that non-vegan old fashioned in the bottom right.
obviously got two donuts. when in rome ... 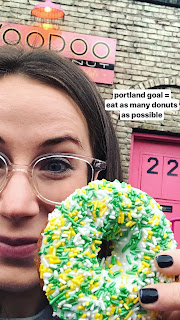 voodoo was definitely delish. i kind of live for a donut these days ... (we got stan's last weekend & it was uh-mah-zing.) ... so i could definitely go for another one of these. my only comment ... is that maybe they were a tad on the banana-y side. don't get me wrong ... i love a banana. but was just surprising.

ok, so it's been 7 seconds & i already take back my banana-y-ness comment ... because i legit want that sprinkle donut right now. take me back to portland ... or austin ... or la. wherever i can get one.